As I’m sure you are aware, tomorrow is the twentieth anniversary of the day that four coordinated suicide attacks against the U.S.A. occurred in our country. Two hijacked commercial airplanes were flown by terrorists into the Twin Towers of the World Trade Center in New York City. Another hijacked plane was flown into the Pentagon, and, finally, United Airlines Flight 93 crashed, after it is believed passengers rose up against the terrorists who had hijacked that plane, preventing, in all probability, an attack on the White House or the National Monument and even greater loss of life. As a result of these terrible events, nearly 3,000 people died, some of them firefighters, police, and others who responded, coming to the aid of others and sacrificing their own lives.

I’m also sure that all of us who are old enough to remember that day do remember—where we were, what we were doing, and how we learned of the events of that morning. I was at my desk in my office at the church where I was the pastor, Zion UCC, Fireside, Bellevue, OH. Looking out my window on that beautiful morning, I remember seeing a perfect September day—a clear blue sky over fields of corn ripe for harvest, cows grazing in a green field in front of a picturesque red barn. Then my phone rang. It was my daughter Jory calling from California. Her first words to me were, “We’re under attack.” Incredulous, I hurried next door to the parsonage and turned on my television to learn what was happening. There was so much confusion. Such a sense of unbelief. Such a contrast with what was happening elsewhere in our country and that fact that where I was everything was just as usual.

I also remember that we held a worship service that evening, we three UCC churches in Bellevue. So many in the community felt a need to come together to share our feelings and to turn to scripture, prayer, and hymns in that shocking time. I also remember a sense of panic being present, with some people rushing to gas stations where there were soon long lines, and to grocery stores to stock up on food.

Twenty years has gone fast, as time seems to do more and more. The world is very different in the aftermath of the events of September 11, 2001, in ways too numerous to mention. There is no lack of things to cause us worry and anxiety because of our longing to feel safe in a world that often feels so unsafe.

And so, where are we to turn? As Christians, ever and always, we turn to the God of Jesus Christ for the assurance that hatred and death do not have the last word. I invite you to take these words from Psalm 46 to heart.

Be still, and know that I am God!
I am exalted among the nations,
I am exalted in the earth.’
The Lord of hosts is with us;
the God of Jacob is our refuge.

May you find strength and comfort in the psalmist’s words, today and always. And may we, as individuals and as a church, find ways to make this beautiful world a place of hope and peace for all people.

I share with you the prayer that The Rev. Ann Kansfield, the FDNY’s first female chaplain, has written for Saturday’s service at New York’s St. Patrick’s Cathedral. The 1:30 p.m. EDT memorial will honor the 343 FDNY firefighters killed in the attacks and the 256 other department members who died from related illnesses. 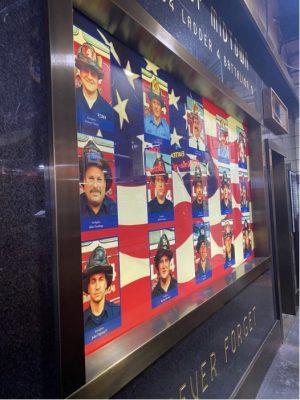 Fifteen firefighters from Engine 54 Ladder 4 comprised the most fatalities from any FDNY firehouse on 9/11.

“We pray for the fallen. They are the ones we love so dearly and miss so deeply. We have entrusted them to you and ask you to continue to embrace them in your love. We don’t really have to tell you, God, since you already know. But we’ll say it again: the ones who have died and whom we entrust to your care are some of the best people — wise, brave, compassionate, joyful, whip-smart and really humorous. They are family, friends, neighbors, and colleagues. They are your beloved children.

“We also pray for the crestfallen. This day marks a time of so much sadness and grief for so many. We ask for your care and comfort for the living. Remind us again and again that you are with us and you always have been.”