I have two questions for you, “If you had been Jesus— had come to save the world— and could choose only twelve people to help you, who would you choose? What qualities would you look for in the people you’d call as disciples, people you’d live and travel with, and teach for three years, then leave with such great responsibility?

Rev. Richard Donovan had some ideas about that. He wrote, “I would choose at least one great administrator – a CEO type –a person with great energy and even greater organizational skills. I would want a top‑notch person at the top.

I would want some great preachers –people who could speak to large crowds and persuade them to follow. It would be nice if some of them were musicians. It takes great music to build a great church. And then I would like at least one Biblical scholar – someone to keep the others on track – not the kind of scholar that sits in the library all day long, but a scholar who understands where the rubber hits the road –a scholar who would help us to understand what the Bible means for our lives. I would want some great teachers –people who can take a difficult subject and make it easy –people who can make us want to learn.

I would want the apostles to have a bit of flair –just a touch of showmanship.  Preaching isn’t entertainment, but it can be entertaining. I would choose apostles who would help us to enjoy our discipleship. It wouldn’t hurt if they had strong speaking voices. And good teeth. And nice hair! And presence –   that elusive quality that says, “I know what I am doing.” That seems like a lot to ask if you can choose only twelve people, but each person could be multi‑talented.  They could do some cross‑training.  They could all have good teeth and hair.

Jesus picked twelve apostles. How did they stack up?  Did Jesus get the kind of people that he needed? Were they great, multi‑talented, handsome, and smart?  Did they get things organized? Did they persuade the people to follow? What did they accomplish?”

Jesus empowered these twelve people and sent them out to preach and to heal.  He was counting on them to carry on his work.  He was counting on them to plant the seeds from which the church would grow. But what a mixed bunch they were!  You must wonder how Jesus could have known that these ordinary people, people full of flaws just like us, would grow to be able to spread the Good News of Christ’s life, death, and resurrection to all the world. That these twelve would be able to bring healing and hope and God’s love. We know very little about their individual accomplishments, but we do know that because Jesus empowered them, they changed the world.

I got to thinking about the impact that ordinary people can have, those whose names are not on the nightly news as movers and shakers, those who are only known by those in their circle of family, friends, co-workers, and acquaintances. As Father’s Day approaches, my thoughts are of my father Robert Louis Zimmerman, and of the impact on my life and the lives of others he had, this man who would seem so ordinary to others, but was so special to me.

I was only seventeen. and had just graduated from high school. when my father died suddenly and without warning on a beautiful July morning from a massive coronary. He was only 48 years old. I marvel in looking back, almost fifty-seven years later, at how much I learned from him in that short time.

Specific incidents stand out in my memory that modeled for me how to value, relate, and care for others. There was the time in the Pelican Restaurant in downtown Sandusky when our family was having lunch and a down-and-out man came in looking for something to eat. I remember Dad paying for his food, and seeing the grubby, bearded man sitting at a stool at the counter gratefully eating his sandwich.

My dad had a small boat repair and storage business, The Cove Marine Service, located next to our home. In the summers he also worked as the captain of the private yacht of a millionaire Cleveland businessman, Harold C. Schott. Albert Jackson, an African American man, was also employed by Mr. Schott as his chauffeur and deck hand. He and my father came to be close friends. When my family visited Mr. Jackson and his family at their house, it was the first time I was ever in the home of a person of color. The message I received, without words being said, was of the equal value of all people. I also remember hearing that on occasions when Dad piloted Mr. Schott’s boat The Nellie Belle to the Sandusky Yacht Club, where he and his party of friends stayed for dinner and entertainment, my dad chose to eat in the kitchen with Mr. Jackson, who was not permitted in the restaurant.

Dad also gave me, by example, the wonderful gift of having someone to listen to you, really listen, with interest and caring. I remember many hours of sitting on our front porch with him, pouring out my heart, feeling much lighter afterward.

He was an easygoing man, whose great sense of humor and joy of life, made everything you did when he was around more fun.

Dad was a man of faith, though he usually attended church only on Christmas and Easter. He was a sailor, a former Coast Guardsman, who found God most often in nature, when out in a boat in the beauty and power of Lake Erie, in the warmth of the sun as it glittered on the bottle-green water, and the cries of sea gulls wheeling overhead. He had a calm and hopeful faith in “the man upstairs.” I always felt safe and secure in his presence and am fortunate that when I think of one of the aspects of God as “Father” it holds a very positive connotation for me because of the father I had.

My dad loved his family very much and, along with my mother, gave me and my sister and brother a happy, stable home in which honesty and truth and respect for others were the order of the day. I will be forever grateful that he was my father. An ordinary man, but extraordinary to me.

Most of us are ordinary people. Most of us haven’t done anything earth-shaking. For the most part, we just keep on keeping on. But the good news is that Jesus worked, and keeps on working, through people just like us. When you think about it, Jesus could have had anyone he wanted as his apostles— so we must believe he wanted ordinary people. We ordinary people can do important things for Jesus today. What we do for justice and peace, out of love and compassion, matters in ways we may never know. May God bless you in your being and in your doing. 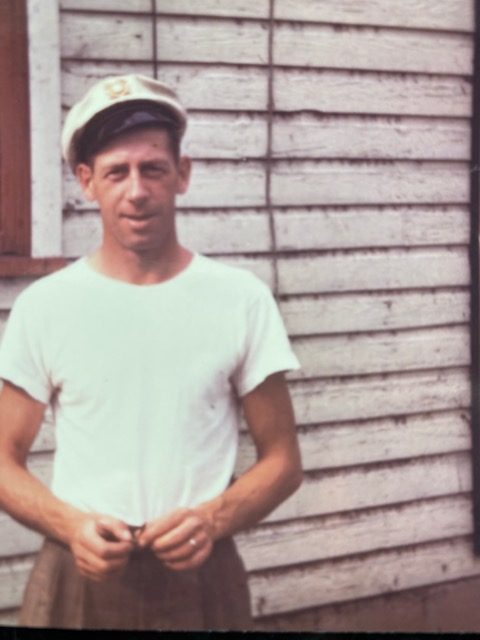